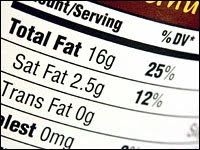 A few weeks ago I received an email from a mommy friend of mine who is concerned with how her 4 year old eats and wanted advise. She seemed to be confused about what is the difference between trans fats and saturated fats. Here is my response:

Q. Where does trans fat come from?
A. According to the Food and Drug Administration (FDA), in 1994-96 we consumed about 5.6grams of trans fat per day. Most of that trans fat comes from the 40,000-plus foods that contain partially hydrogenated vegetable oil. Those include many stick margarines, biscuits, pastries, cookies, crackers, icings, and deep-fried foods at restaurants. Because Frito-Lay, margarine producers, and some other companies recently stopped using (or cut back on the use of)partially hydrogenated oils, we now are consuming a little less trans fat. About one-fifth (1.2g) of the trans fat came from natural sources, especially beef and milk prodicts(bacteria in cattle produce trans fat that gets into meat and milk). A little more occurs naturally in vegetable oils and forms when vegetable oils are purified.

Q. Where oils partially hydrogenated?
A. To increase shelf life and obtain the cooking properties of solid shortenings, oils are partially hydrogenated. That eliminates most of the unstable fatty acids–those with three or two double bonds. Partially hydrogenated oils have been used to replace butter, lard, palm oil, coconut oil, and other “hard” fats in such foods as many processed foods. Fortunately, food technologists have been figuring out increasing better ways to make those foods taste better without hard fats.

Q.Why are partially hydrogenated oil and trans fat so bad for your health?
A. Trans fat increases the amount of “bad” (LDL) cholesterol in blood, and the increases the risk of heart disease. It also decreases the “good” ( HDL) cholesterol, which may increase the risk of heart disease even more. Preliminary research suggests that trans fat might have additional harmful effects on the body. Finally, the hydrogenation process destroys some of the vitamin K in vegetable oil, which might be a problem for consumers who have marginal intakes of that vitamin.

Q. How bad is trans fat?
A. Extrapolating from estimates made by the FDA, replacing with more healthful ingredients all the trans fats that comes partially hydrogenated oils, likely would save upwards of 10,000 lives a year.

Q. So should I avoid every molecule of trans fat?
A. Not necessarily. Trans fat is not a toxin that will kill everyone who eats even a tiny amount. It’s worth avoiding foods in which partially hydrogenated oil is down near the end of the ingredient list. ( Ingredients are listed in order of predominance.)

Q. With what ingredients would companies replace partially hydrogenated oil?
A. In the case of margarine, many fried foods, and some baked foods, companies often use canola oil, sunflower oil, and other liquid oils. When a solid fat cannot be avoided, companies might use palm oil, butter ( though rarely because it’s expensive), beef tallow, or lard. Ideally, companies would work hard to use less of those saturated fats, perhaps mixing them with a liquid oil.

Q. How are partially hydrogenated oils and trans fat regulated?
A. Currently, the FDA considers partially hydrogenated oils to be safe and does not set any limits on their use or trans-fat content. Nor does it limit the trans-fat content of processed or restaurant foods. However, beginning January1, 2005 the amount of trans fat in a serving of food is listed on food labels.

Q. Which companies are reformulating their products?
A. Ruby Tuesday’s and Legal Sea Foods restaurant chains have stopped using partially hydrogenated oil in their deep-fat frying. Kraft/Nabisco, one of teh biggest users of partially hydrogenated oil, is marketing trans-free Triscuits and several varieties of trans-free Oreos. Voortman’s Cookies is going in the trans-free variety of Goldfish and plans to reduce trans in other products. In 2002, McDonald’s said it would switch to a lower-trans cooking oil, but as of mid 2004 has not done so. Expect many more changes before 2006,as companies try to avoid the stigma of listing trans fat on their labels.

Q. Does any nation ban or restrict partially hydrogenated oil or trans fat?
A. Denmark limits the trans-fat content of foods to two percent of the fat. (Naturally occurring trans fats are exempted from that limit).

Q. I’m avoiding partially hydrogenated oil. What else should I worry about?
A. The main thing is to eat a diet that is based largely on fruits, vegetables, animal-products, and natural occuring fats (avocado, butter, oilve oil, coconut oil. . .). Try to minimize sodium, and refined sugars.